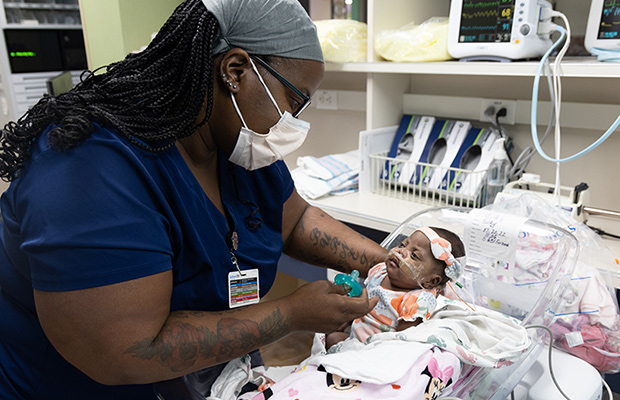 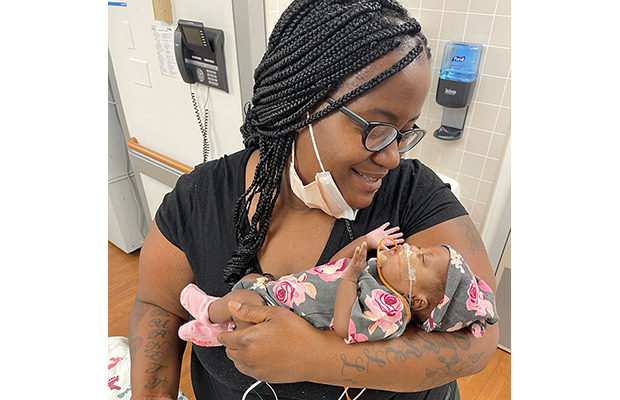 In 2016, Ruby Theophile, 33, delivered a stillborn son after a challenging pregnancy. Coupled with previous accidents that led to multiple abdominal procedures, this loss led her to believe she would never give birth to her own child.

“I’ve been babysitting all my life, helping other people with their kids, and I wanted my own,” Theophile said. “I had been trying for so long that I thought maybe it wasn’t meant to be.”

Six years later, Theophile became pregnant again, but the complications of her previous pregnancy seemed to follow her. After being diagnosed with severe polycystic ovarian syndrome (PCOS), it was determined she was high risk, and would have to visit her OB-GYN every two weeks to monitor the baby’s health. Her PCOS coupled with a short cervix led Theophile to doubt her ability to reach full-term with her new baby.

“I told her we were going to do everything we can to keep her in the best shape possible so she could get to the delivery date and carry this baby to term,” Dr. Lee said.

Dr. Lee walked Theophile through different factors, such as stress, balancing being a new mom with her other responsibilities, and dealing with nausea and vomiting.

“When I was told I was pregnant, I was happy but also terrified because of my history with pregnancies,” Theophile said. “I had anxiety every day because I thought it was never going to happen and when it did, I thought I was going to wake up every day with some kind of complication that would end my pregnancy.”

Due to her complex case, she began seeing Nicholas Tinker, MD, a maternal-fetal medicine fellow at Jackson Memorial, every other week. During a routine visit at around 20 weeks, Theophile went into labor. The team knew they had to act fast. Theophile had done her own research on pre-term births and ways to combat them. She advocated for an emergency cerclage – a procedure that temporarily stitches the cervix shut.

“My job as a high-risk doctor is to give all the information possible to the mom, so Ruby knew the risks and benefits, and she was willing to take those risks for the sake of her baby’s health,” Dr. Tinker said. “Thanks to her advocating for the cerclage, she was able to make it further along in her pregnancy than originally expected.”

However, at 25 weeks, Theophile’s biggest worry came true as she went into pre-term labor again.

Since the baby was presenting feet down, Theophile was prepped for an emergency C-section. She soon began to reflect on her failed pregnancy.

“All of the pain and emotions that I felt in 2016 during my stillborn birth are what I felt when I was told that this baby had to be born at 25 weeks, that we couldn’t go any further,” she said.

Through it all, Theophile kept her faith.

“I started remembering that in the Bible, it says, ‘If God brings you to it, He’ll bring you through it.’ That’s when I began to pray and ask God to be with me during this journey,” she said. “I knew He didn’t bring me that far just to let that happen after knowing what I went through six years ago.”

During labor, the team quickly took note of an unexpected complication – chorioamnionitis – an infection of the amniotic fluid and tissue that surrounds the fetus during the pregnancy. Thanks to Dr. Tinker, Dr. Lee, and the rest of the care team, Theophile delivered a baby girl named Jaelynn. At just 1.5 pounds, Jaelynn was immediately taken to Holtz Children’s neonatal intensive care unit (NICU) where she was intubated and treated for mucus in her lungs.

Throughout the first three weeks of her life, Jaelynn faced several complications, including apnea of prematurity, risk for sepsis, respiratory failure, neonatal pneumonia, neonatal jaundice, and anemia of prematurity. Despite these challenges, she recovered quicker than anticipated and has been thriving in the NICU.

“The most miraculous thing is that most babies will have what we call a ‘honeymoon phase,’ which is during the first two weeks of life when their vitals look very good and they’re stable,” Dr. Lee said. “I don’t think Jaelynn ever left the honeymoon period. I think there was a higher power watching out for her.”

In three months, Jaelynn’s health has improved dramatically. She has transitioned to using a high-flow nasal cannula, which takes stress off her lungs and helps with eye development, and is now drinking her mother’s milk and formula.

After 100 days in the NICU, Theophile got the good news that Jaelynn will be discharged soon, a milestone she did not expect to happen so quickly.

“It feels like no one could take her from me because I have her forever. I have someone to love forever and someone to love me forever,” said Theophile of finally getting to hold her baby girl and take her home.

“If I could give the doctors and nurses the world, I would,” she said. “Because they gave me my world.”